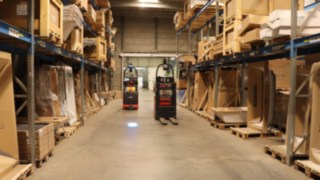 The L-MATIC in operation at HOLTER

“Fredl” and “Gust” have settled in well at Austrian sanitary equipment specialist HOLTER, as you would expect. The two Linde L-MATIC pallet stackers reliably make their rounds between the warehouse and dispatch at the headquarters in Wels. Meanwhile, the human colleagues get to focus entirely on their actual work: value-adding order picking.

Admittedly, there is one thing that they can’t yet do at the Austrian sanitary equipment wholesaler HOLTER: they can’t send out the customer’s products before they receive the order. But, with its exceptionally efficient logistics concept, the family-owned company established in 1873 is getting close: “Whatever our customers order by 6.15 p.m., we deliver the very next day—practically nationwide. If the order is received by 10.30 a.m., we can even deliver it on the same day on request,” explains Lukas Vormair, head of logistics in Austria and Germany. This ambitious delivery promise is made possible by a sophisticated central warehouse strategy. 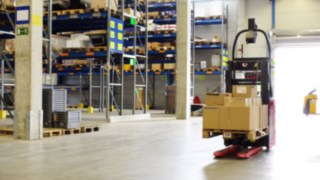 From Wels, where over 30,000 items are constantly held in stock, a comprehensive in-house fleet of 155 trucks delivers the orders to eight additional logistics support points distributed across the whole of Austria and Bavaria: from gaskets to spa baths, siphons and heaters. “This means that we are effectively not just one of the top three sanitary equipment wholesalers in Austria, we are also an outstanding logistics company,” mentions Vormair with pride; which of course means that goods transport can never be efficient enough.

Solution for the big stuff...

In the 21st century, whenever you hear talk of logistics and efficiency, this almost inevitably leads to the topic of automation, as is also the case at HOLTER. “The internal product flow processes must be in harmony with our performance promise to our customers—and this was not the case across the board in the past,” Vormair outlines the starting situation. While small parts have found their way from the warehouse to the outgoing goods check via an automated conveyor system in Wels for many years, manual processes were used for larger products. Vormair: “After picking, in some cases employees then had to use their equipment to transport the products over very long distances to the dispatch department. This inevitably led to numerous empty trips—quite apart from the fact that the trips there and back cost employees valuable picking time.” 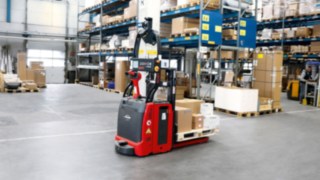 This was a clear case for the internal 'Logistics Quality Assurance' department, which is continuously looking to improve the logistics processes. “We travelled to LogiMAT in Stuttgart and first had a look at what the market was offering in terms of automation,” recalls Vormair. After an initial provider check, the direction was clear: “Reliability and adaptability were our top priority. On the other hand, right from the start, we eliminated solutions that would have significantly intruded into our existing warehouse infrastructure. At the end of the day, we are not a traditional production facility that exclusively uses AGVs, so we wanted an automation concept that was as compatible with the other traffic in the warehouse as possible.” 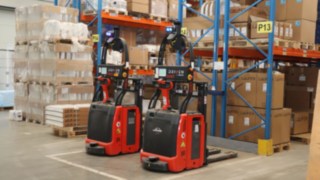 Durable and reliable technology, no time-consuming installation of guide rails or the like, easy scalability—these demands quickly led the sanitary equipment specialist to a Linde Material Handling automation solution. “Several providers held presentations on site, but the Linde concept impressed us the most,” reports Lukas Vormair. Besides the technical features, HOLTER was particularly taken by the 'human' component: “Everything was absolutely top-notch: the advance consultation, the presentation, the knowledge of logistics processes, and the manner in which these have to change as part of an automation. In short, we had a really good feeling about Linde right from the very first day.”

But, before the two autonomous Linde L-MATIC pallet stackers could start their work at HOLTER, a few preparations had to be made. Firstly, the issue of floors. Vormair explains: “Admittedly, our hall floor was starting to show its age and was damaged in places. As a result, we first refurbished the flooring in the area in which the Linde AGVs would be in operation.” Another key point in the specifications related to employee integration; HOLTER insisted on maximum transparency right from the beginning. “We spoke with our employees and jointly timed how long they need to manually travel from the warehouse to the dispatch area and then back with an empty load. We were surprised to find that this accounted for more than 25 percent of the daily working time. This quickly made the matter clear to our workforce—especially as their experience with the small parts transported by the conveyor system meant that they knew that in our company automation did not place jobs at risk. Quite the contrary: we are giving our employees the opportunity to focus entirely on their core task—picking.” 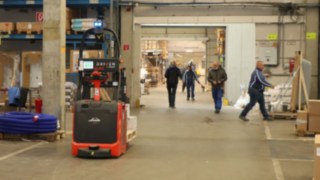 For some time now, “Fredl” and “Gust”, the names selected for the two Linde L-MATICs by the employees, have been reliably going about their business in Wels. To make this possible, the pros at Linde first created a virtual map of the hall with important fixed points to provide an orientation point for the trucks. Then, four stations were set up in the warehouse as well as in the dispatch area, each with four different colour markings. Employees just need to bring the picked pallets to the relevant station and place them in the blue, orange, green or red zone as instructed. Now a single push of the button of the same colour is all that’s needed to transmit the transport order to one of the two L-MATICs. 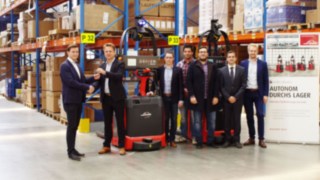 The rest literally takes care of itself: as soon as Fredl and Gust reach their destination station and have deposited the pallets, an employee scans the goods to confirm the accuracy and quantity, and then transfers them to the dispatch area. This final check was another new addition by HOLTER—and is a good example of the positive consequences that automation can have on the entire process landscape.

“Scanning the goods and the associated check of the correct dispatch area by region almost entirely eliminates dispatch errors,” says Lukas Vormair, pleased. And, speaking of the placement of the goods, another positive side-effect of the automation project is the much tidier warehouse environment overall. “The routes where the AGVs are operating must be kept clear. This is something that we made clear to the team from the start. And, even though our staff were used to, at times, temporarily parking goods at various locations, the routes were consistently kept clear from the very first day,” reports the impressed HOLTER logistics manager. The trucks obviously still detect obstacles and reliably brake—for instance if a pedestrian crosses their path—and the clearly visible Linde BlueSpot™ provides added safety.

In the meantime, the two Linde L-MATICs have now been plying their trade at HOLTER for almost four years, completing around 150 trips a day. Fredl and Gust’s shift lasts from 6 a.m. to 8 p.m., during which time the trucks are almost constantly on the go, as a replacement battery is available for each of the trucks. If the charge of the lead-acid energy-storage systems fall below 20 percent, the pallet stackers automatically move to the battery replacement station. Once there, an employee manually replaces the battery in just a few minutes. Lukas Vormair concludes:

all in all, we got precisely what we were after. Our people in the picking area have more time for their actual job and our product flow now fits in perfectly with our performance promise.

And the entire concept is flanked by the comforting certainty that we can always rely on the support provided by Linde MH. The most recent example is the newly planned route, which was made necessary due to renovations in the warehouse. “A Linde team quickly arrived on site to check the feasibility of the new route.” In Wels we are already considering topping up the L-MATIC fleet with additional trucks, which could then take over the transport jobs in a new hall. After all, good concepts tend to come full circle, sometimes even (fully) automatically … 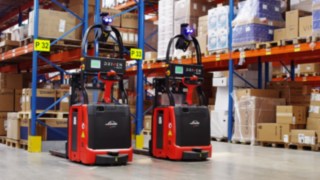 Fritz HOLTER GmbH, with its headquarters in Wels, is one of the top three sanitary equipment wholesalers in Austria. Founded in 1873 and still family-owned, HOLTER has around 850 employees at 20 sites, 330 of whom work in logistics. The roughly 30,000 different products are delivered from the central warehouse and eight additional logistics support points in Austria and Germany with a comprehensive in-house fleet of 155 trucks. 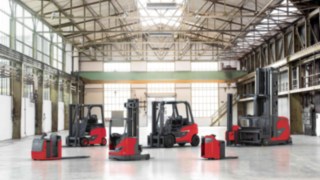 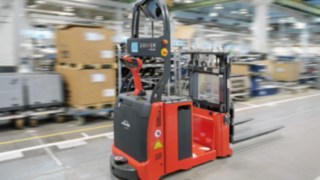 Linde Material Handling is bringing its range of cutting edge robotics trucks to this year’s IntraLogisteX to demonstrate the latest innovations and technologies within the materials handling industry. 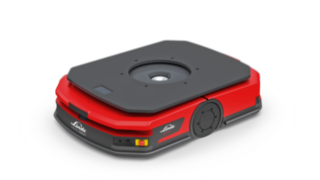 The C-MATIC automated transport platform from Linde Material Handling transports loads of up to 1500 kilograms autonomously. 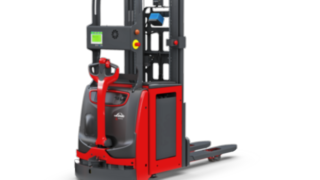 The Linde L-MATIC HD is an automated pallet stacker that can transport loads of up to 2000 kg and store and retrieve them at medium heights of up to 4 m. 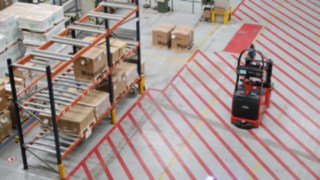 Automated around the world

With the introduction of two automated L-MATIC AC pallet stackers from Linde Material Handling, Schneider Electric, a leading company for digital energy and automation solutions, improved the overall efficiency of their logistics centre in Sant Boi de Llobregat in Spain. 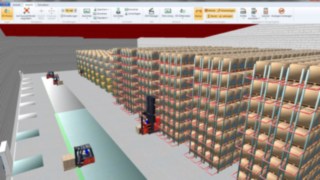 Discover how our 3D warehouse planning and simulation system can analyse all levels of your warehousing project, provide optimum storage layouts and also a detailed view of your warehouse operation using dynamic simulations of pallet throughputs, order picking rates, truck movements and their consequent energy consumption. 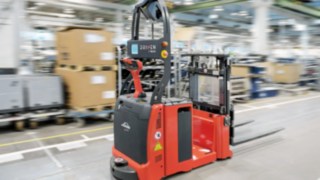 Recognising the changing market dynamics and customer demands, we have established Linde Logistics Solutions, a specialist unit dedicated solely to helping customers with their complex materials handling needs. Linde Logistics Solutions' team of experienced experts will work together with you to undertake complex projects to yield operational efficiencies, improve productivity and better utilise both equipment and labour resources. 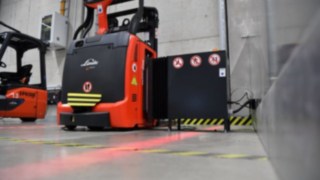 Following our automation webinar, we saw an influx of questions from attendees wanting to know more about the safety features in an automated Linde solution. You'll find the answers here! 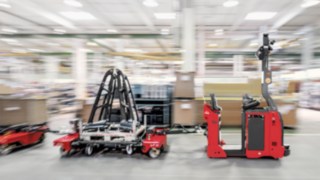 Trends in Automation within the Material Handling Sector- An Established Solution or One For the Future?

Automated solutions have been used in the Material Handling sector for decades and the earliest ASRS systems (Automated Storage and Retrieval Systems) have been dated as far back as the 1960s. Whilst these systems were originally designed for heavy-pallet loads, advancements in technology have enabled these systems to handle much smaller loads – allowing increases in efficiency and a greater density of warehouse storage. 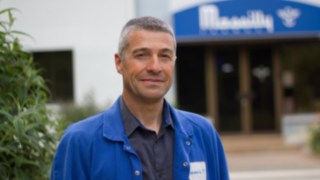 The most natural thing in the world

The main factory of the French metal packaging manufacturer Massilly in Cluny relies on extensive automation in the production process. Until recently the final process step, transporting the pallets to the warehouse, was conducted manually. This task is now also being performed by automated industrial trucks, with great success. Representatives of the company are now travelling to Cluny to see for themselves the benefits of Linde robotics equipment. 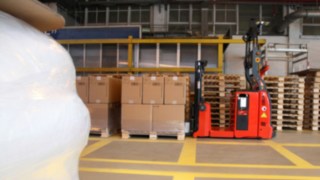 Optimization is a question of chemistry

Simple does not always mean trivial: proof of this is the automation project of Linde Material Handling for BASF Italia. In order to optimize efficiency and safety, a flexible, secure and fast-to-implement solution for Logistics 4.0 was integrated on the basis of an automated guided vehicle (AGV). 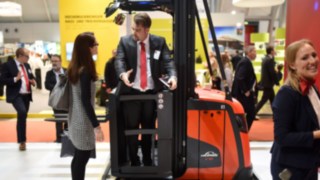 We are the systems integrator for internal material flow

Automation is one of the trending topics in intralogistics. In this interview, Tobias Zierhut, Head of Product Management Warehouse Trucks, explains why data will play a key role in the future of warehouse technology, and why Linde Material Handling sees itself as the market leader in robotics.