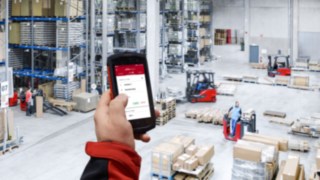 Getting the right industrial truck and driver to the right place at the right time is often a tricky task for fleet managers. The new Truck Call app from Linde Material Handling now enables users to digitally assign such transport tasks. This considerably simplifies and speeds up communication between fleet managers and drivers.

A typical day-to-day example: Having suffered delays on the road due to adverse traffic conditions, a truck carrying goods arrives at the yard much later than expected. Rapid unloading is needed right now. If you only knew where on site the right forklift is. What to do? Charge around the premises, searching for it? Make lots of phone calls? Ask the truck driver to wait?

Linde Material Handling now offers a better solution for such and many other cases: the new Linde Truck Call app. This application makes it much easier to assign unscheduled transport jobs and ensures quicker communication between supervisors and drivers. “In principle, this works like a modern taxi call,” explains Marietta Landsmann, Senior Manager Digital Products at Linde Material Handling. “The taxi firm receives instructions such as ‘Can we order a taxi for eight people at address X?’ This request is broadcast to all the company’s mini-bus drivers – until one of them confirms and accepts the journey.”

The new Truck Call app from Linde Material Handling enables users to digitally assign such transport tasks. This considerably simplifies and speeds up communication between fleet managers and drivers.

The developers of the Linde Truck Call app have transferred this principle to the logistics processes of companies with smaller industrial truck pools. App download and registration is via the Google Playstore. The next thing for the fleet manager to do is to create virtual duplicates of the vehicles including their respective configurations and features via the web portal or app. Additionally, the app is installed on the drivers’ cell phones. If a transport or picking task is to be completed, the person responsible enters the relevant information in the system. This automatically sends a message to all the drivers in question – and they can either accept or reject the job.

Especially in smaller companies, fleet managers have to cover many tasks and therefore have little time to walk around the premises looking for the right truck for a specific job. In the future, they will be able to find one while sitting at their desks. Customers who have already tested the app report significant efficiency gains in their fleets. As Marietta Landsmann says: “By digitally assigning jobs to the vehicles, fleets can be utilized much better than before and take on more orders than they could before using the app.”

An additional benefit of the new Linde solution is the integrated documentation feature. If, for example, the driver notices any damage when moving goods, they can easily record this by using the integrated photo function. The completion of a transport task can also be conveniently confirmed via the app. “Up to now, there have often been empty runs because a forklift driver had to drive back to his superior and hand in the delivery note,” says Landsmann. The new Linde Truck Call app now renders such empty runs unnecessary.