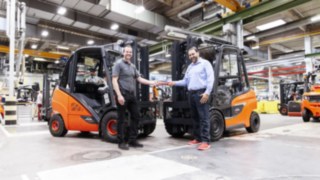 A red wedge-shaped chassis, a black overhead guard frame and overhead tilt cylinders: The distinctive design of the 392/393 IC forklift series from Linde Material Handling in the 2.0 to 3.5 ton capacity range has shaped in-house goods handling at countless companies in Europe and around the world over the past 18 years. This era ended on July 1st with the production of the last order for one of the largest brick manufacturers in North America. A total of almost 161,000 vehicles were produced up through this time. In the future, only the models of the new Linde H20 to H35 diesel and LPG series, launched at the beginning of 2020, will be coming off the line at the Aschaffenburg assembly plant.

A flashback to January 2002: Accompanied by Bengal fireworks and rousing music, the new Linde forklift drives out of an overseas container on Germany’s highest mountain, the Zugspitze. Above the steel container, a replica of the truck, made entirely of ice and snow, rises nine meters into the winter evening sky. The launch of the then new 39X counterbalance forklift truck series from Linde Material Handling was as spectacular as the product itself.

The series set technical standards in many areas: for example, with its overhead tilt cylinders. These divert parts of the load forces acting on the lift mast via the roof frame, thus enabling narrower lift mast profiles for better visibility. Another feature that is unique to this day was the decoupling of the chassis from the drive and steering axles as well as from the tilt cylinders, in order to optimally protect the driver from harmful human vibrations. Electronic lift mast control using the Linde Load Control system provided an innovative boost in terms of driver comfort. Large control levers were transformed into handy, finger-operated knobs, integrated into a wide armrest, with which the driver could direct the mast functions and auxiliary hydraulics.

All of these special design features, having proven their worth, are now also part of the new generation of vehicles which Linde Material Handling started producing at the beginning of 2020 – albeit in a more advanced form. The new trucks, which differ from the previous models visually by means of the characteristic “shark fin” and the significantly enlarged step, are networked as standard and communicate via a cloud server, all while meeting the highest security standards – this makes the new 12xx series the first range of fully networked Linde trucks. The new vehicles can be equipped with numerous assistance systems and lighting solutions and support the driver by offering a comfortable workplace. Furthermore, the modern, maintenance-friendly industrial motor with integrated particle filter as standard and optimized Linde hydrostatic drive ensures sustainability and high productivity.

On July 1st, after 18 years, the era of the 392/393 IC forklift series from Linde Material Handling in the 2.0 to 3.5 ton capacity range came to an end. Andreas Häcker, Head of Assembly Unit 1 at Linde Material Handling (left in picture), symbolically handed over the baton to his colleague Talip Kilinc, Team Leader Project Coordination.

On July 1st, after 18 years, the era of the 392/393 IC forklift series from Linde Material Handling in the 2.0 to 3.5 ton capacity range came to an end. Andreas Häcker, Head of Assembly Unit 1 at Linde Material Handling (left in picture), symbolically handed over the baton to his colleague Talip Kilinc, Team Leader Project Coordination.

“With this passing of the baton, Linde Material Handling has reached another milestone in corporate history,” says Stefan Prokosch, Senior Vice President Product Management Industrial Trucks Counterbalance at Linde Material Handling. The historic triumph of Linde forklifts began in 1967 with the legendary Hubtrac, and the first trucks with overhead guard followed shortly after in 1968. In 1979, the 331 series was launched. The big breakthrough came in 1985 with the 351 series, and from then on, annual production numbers increased continuously to new highs. With over 100,000 units produced it was the best-selling model series in Europe by the time the 39X series was ready for launch in late 2001. “We are very proud that we were able to once again significantly exceed this impressive figure with our now discontinued 392/393 series,” says product expert Stefan Prokosch, adding: “This makes it clear that we are aiming to achieve highly ambitious goals with our new 12xx series.”

One unique feature of the Linde forklift has remained unchanged for decades: the Linde hydrostatic drive, which transfers the engine power to the drive wheels and lifting hydraulics without any loss via a closed, maintenance-free hydraulic system. Undergoing continuous technical refinement, it enables smooth starting, rapid changes of direction and sensitive, precise maneuvering in the tightest of spaces, all while ensuring maximum handling performance with minimum fuel consumption.