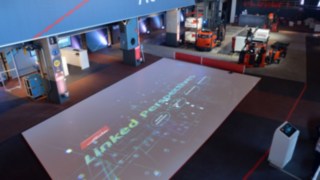 Intralogistics is turning to automation

With an increasing demand for self-driving and self-lifting industrial trucks, a paradigm change is in the offing: the lines between manual and fully automatic operation are becoming increasingly blurred.

Visitors will be offered a glimpse into the near future and the more distant future too: how can the "smart factory" be made a reality and how are automation and networking interrelated?

An order picking forklift takes a pallet from a shelf, places it on a transfer station where it is transferred to a pallet stacker and, after a short transport distance, is placed on a roller conveyor. Once the pallet has passed along the roller conveyor to the other end, it is received by a waiting Linde Factory Train, which takes the pallet to another shelf – all this takes place fully automatically, without the need for a driver to control the equipment.

At WoMH, Linde will use this multi-stage operating cycle to showcase what is already conceivable using autonomous industrial trucks and how loads can be transferred in an automated manner between self-driving trucks. That is the vision for the "smart factory": the intelligent installations of the future. And it is this future that Linde is already moving towards in its product range.

An issue for the future: interaction between trucks

"Towing, transporting, storing – we will have an automated solution in all categories," says Tobias Zierhut, Head of Product & Service Marketing, Linde MH. Many applications will be linked together in a networked system in the future: "The completely automated interaction of various truck models – that is a topic of the future, especially in the link between production and the warehouse,” affirms Zierhut. This will include a connection to the warehouse management system, where data will be analysed, operating commands generated and employees given an overview of the position of all of the trucks or goods at any time.

Mixed forms between manually operated industrial trucks and fully automated shelving and conveying systems are also developing increasingly frequently, in particular in warehouse logistics. A building block for this is the K-MATIC order picking forklift, a preview of which is to be presented at WoMH: With the new Linde "driven by Balyo" robotic truck, which should come to market at the end of the year, the self-driving Linde fleet will also be able to operate vertically. Automatic narrow forklifts run between shelves on a cable or rails and pick up or unload goods on both sides. When it has to change aisle during its operation, it moves without mechanical guidance using geonavigation.

"There is a clear trend for narrow-aisle warehouses in Europe because of increasing property prices and a higher throughput of goods," explains Zierhut, "automation offers our customers the opportunity to make further efficiency increases." Narrow aisles, a high stock density and lifting heights of 12 metres and more create the ideal environment for the Linde K-MATIC. The order picker is the fifth model in the Linde robotics fleet, which already includes two pallet stackers (L-MATIC), one tractor (P-MATIC) and a pallet truck (T-MATIC).

"Automation will not be the only solution to all of tomorrow’s intralogistics demands, but it will play an important role," says Massimiliano Sammartano, Vice President Sales & Service Marketing & Operations, Linde MH. In the medium-term, the programme will therefore continue to be developed. Linde robotics equipment feature geonavigation, using which the equipment can freely orient itself in space without any other infrastructure.

Other advantages of the MATIC fleet include the great potential for the networking of machines and systems, the high level of transport safety due to components such as sensors, scanners and cameras, and the option of switching between self-driving and manual operation at any time. "For the customer, there is great interest in automated solutions that can be integrated gradually into existing operational logistics," says Zierhut – and Linde has the perfect solution.

The future of intralogistics: WoMH demonstrates a wealth of ideas and solutions

Under the title ‘Linked Perspectives’, the World of Material Handling event will provide answers to the biggest questions which intralogistics will face in the future: not just automation, but also networking, individualisation and energy systems. "Internal logistics will increasingly be networked, digitalised and automated," states Sammartano. Spanning over a space measuring 12,000 square metres, the event will feature exhibition areas, 3D-media shows, expert forums, product demonstrations and experience zones. The exhibits can be demonstrated as part of guided group tours or visitors can discover them on their own. “Following on from the comprehensive exhibition two years ago, we are concentrating this year on the four most significant areas of expertise which will be of vital importance for our customers in the very near future,” explains Manfred Höhn, Head of Marketing Communication and Branding, Linde MH.