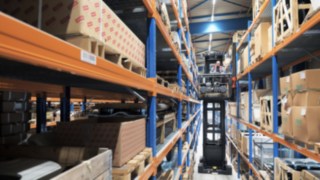 Logistics fleet from Linde Material Handling in use at Yanmar.

The task: to transform a former production hall into a high-performance logistics centre within just a few months. The solution: a comprehensive approach, close collaboration and the right project partner. Model: The new spare parts logistics solution from the construction machinery specialists Yanmar Compact Equipment Europe at the plant in Rothenburg ob der Tauber, Bavaria.

Any project that aims to use existing structures in the most effective way possible requires creative solutions. This applies in particular to intralogistics, especially as it is not always possible to optimally adapt the required space to the logistical requirements by building a new warehouse, for example. In 2018, Yanmar Compact Equipment Europe, a subsidiary of the Japanese construction machinery group Yanmar, found itself in this exact situation. The company, which in Europe produces wheeled, mini and midi excavators as well as wheel loaders, had undergone a major restructuring in the previous years. Production was moved from the plant in Rothenburg ob der Tauber to nearby Crailsheim, and in turn all spare parts services for Europe, the Middle East and parts of Africa were centralised in Rothenburg. 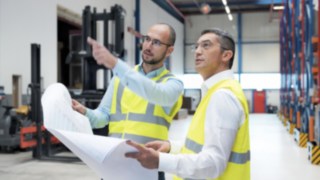 “Building a new hall here on-site was never an option,” recalls Markus Köhler, Director Aftermarket CE Europe at Yanmar in Rothenburg. “Instead, we wanted to turn the former production hall into the ideal space for our spare parts centre.” A very ambitious project, at the heart of which lay two fundamental challenges: firstly, the new logistics centre would have to supply the entire EMEA region with axles, engines, slewing rings and other parts, which required as much storage space as possible. Secondly, the construction conditions for the building, which was previously used for an entirely different purpose, were less than ideal. “The hall is only 6.5 metres high and has a pitched roof, with vertical supporting pillars and horizontal cross struts beneath the roof,” Köhler says, describing the initial conditions. 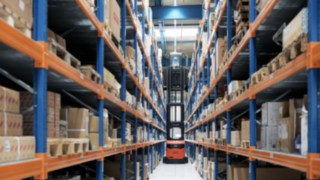 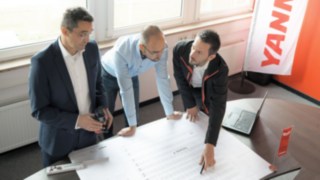 “We didn’t really need to think about it for long. The ‘everything from a single source’ principle is naturally much more efficient for us with a project of this scope than coordinating numerous, time-consuming individual solutions: finding one supplier to build the racking, another to do the electrics and someone else to install the induction loops for the narrow aisle trucks, etc. It was ideal for us to have just one point of contact, who not only had the relevant experience but could also coordinate the whole project in the background.” The contract was awarded shortly before Christmas 2018, and just a few weeks later, in February 2019, the building works began on-site. “After all, in our industry, time is basically as valuable as space,” jokes Köhler.

Many variables, one partner

Unsurprisingly, the project team had an extremely long to-do list: the hall, which measures 4000 square metres, would need to hold 7000 new pallet spaces; at the same time, when it came to logistics planning, it was crucial to consider the sheer variety of the different parts to be stored there. “We don’t just have pallet goods, but also large, bulky parts like truck axles up to 2.4 metres long, which weigh a massive 1.2 tonnes. In addition, the dealers who order parts from us are constantly needing products like filters, while mechanical parts like axles are ordered less frequently,” explains Dominik Haag, Parts Operations Manager at the Yanmar plant in Rothenburg ob der Tauber. So there were a huge number of variables, which were compounded by the various construction issues. “The situation at Yanmar was really quite complex,” recalls Jozo Dramac, who is in charge of intralogistics for the Linde dealer. “There were also various issues that cropped up during the project, which we had to deal with flexibly in collaboration with the customer. During the works we were almost permanent fixtures in Rothenburg and we spent a lot of time coordinating with the team there.” 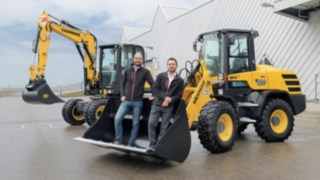 This close collaboration between Yanmar and the intralogistics experts from the Linde dealer resulted in made-to-measure solutions in the truest sense of the word. The logistics experts were able, for example, to design the compartments for all 25 racking shelves in four different heights, in order to accommodate the varying sizes of the spare parts. The vertical supporting pillars in the hall were optimally integrated into the racking design through intelligent architectural solutions. “We essentially built the racking around the pillars so as not to waste any storage space,” says Dominik Haag. On a technical level, equally challenging were the cross struts beneath the roof, which presented a clear safety hazard with regard to loading and unloading on the highest racking shelf, which measured 6.20 metres in height. “Whenever an employee is working with a narrow aisle truck at this height, we have to ensure that there is no risk of them driving into one of the cross struts,” says Dominik Haag. To solve this problem, the experts from Ernst Müller brought the Aisle Safety Assistant, an assistance system for the Linde K truck, into the equation.

The system uses RFID tags installed in the middle of the base, which allow the technology to detect the interfering contours of the cross strut in good time and lower the mast sufficiently to allow the truck to pass safely underneath the edge of the strut. This solution is as ingenious as it is effective, and is also used with forklift trucks at the plant. “We can focus completely on our work, and the system monitors the situation overhead,” says Peter Dettke from warehouse logistics. The two new K trucks are also equipped with special incline barriers: if the operator leans on them, the components incline outwards up to ten centimetres to give the employee better access to the goods to be picked. “It is clear that there are many advantages to using one supplier to provide the complete package,” says Markus Köhler, Director Aftermarket CE Europe.

If the same person who builds the racking is also the one supplying the trucks, they already know exactly what they need and which potential hurdles will have to be overcome – as with our construction situation.

In the end, the herculean project was completed in just two and a half months. “We started putting the first goods away in some of the 12 racking aisles while the rest of the racking shelves were still being built,” Köhler says, looking back at the project with satisfaction. In fact, Yanmar’s requirements regarding the capacity of the spare parts warehouse were even exceeded in the end. Köhler said, “There were 7000 pallet spaces in the specifications, but thanks to the excellent planning we ended up with 8171. That’s what I call ‘made to measure!’” 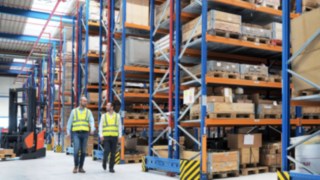 Yanmar Compact Equipment Europe is part of the construction machinery group Yanmar Co. Ltd, which is based in Osaka, Japan. The company produces compact construction machinery in Crailsheim, Baden-Württemberg, Germany, and in Saint-Dizier, France, and also has a logistics centre for spare parts distribution for the EMEA region in Rothenburg ob der Tauber. Some 100 employees work at this site, sending out around 40,000 different parts as quickly as possible. Each year, more than 100,000 deliveries are made from the logistics centre to Yanmar dealers, mostly express deliveries. The on-site logistics fleet comprises primarily Linde trucks, with two narrow aisle K trucks, a Linde H25, several electric forklift trucks with load capacities of 1.2 to 2.0 tonnes and a reach truck and a pallet truck T20 SP. A central warehouse management system takes care of storage and retrieval within the 4000 square metre logistics hall, which has 12 aisles and 25 racking shelves; the employees pick the goods either manually or using the appropriate truck, depending on the order details and storage location. 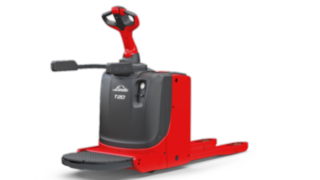 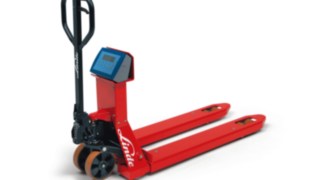 The M25 Scale+ pallet lift truck also has a high load capacity and a scale system to precisely document the load quantity. 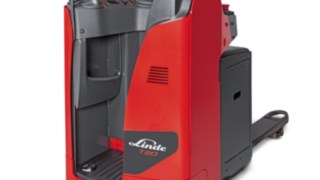 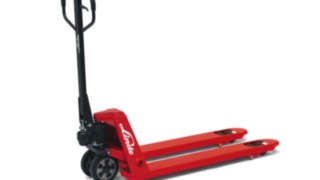 The M25 pallet lift truck has a particularly rugged construction and can therefore can take 25 percent more weight than comparable models. 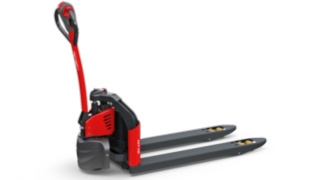 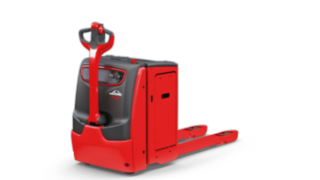 With the T25 – T30 pallet truck from Linde Material Handling even heavy loads can be manoeuvred in confined spaces. 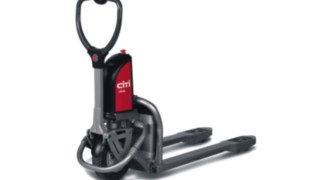 The electric pallet truck CiTi one from Linde Material Handling provides for rapid transport when goods are delivered by truck. 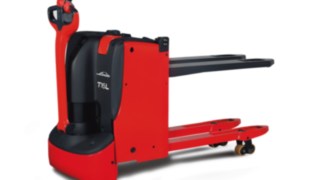 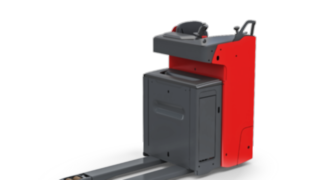 The electric pallet trucks T20–T25 R are quick and versatile when handling pallets. They enable the productive handling of loads in confined spaces. 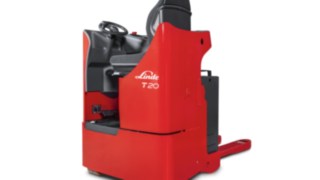 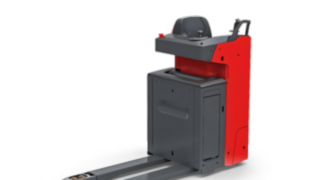 The T20–T25 SR electric pallet trucks from Linde are extremely fast and manoeuvrable. They enable productive handling of loads in confined spaces. 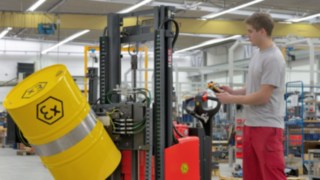 The explosion-proof ('Ex') trucks from Linde Material Handling combine the tried-and-tested advantages of series-produced trucks with comprehensive explosion protection measures as per the ATEX Product Directives.